As an instructor at Music Motive, I frequently get asked about our studios and their locations. For anyone who has been wanting more information on this topic, look no further! This article will serve as your all-inclusive guide. 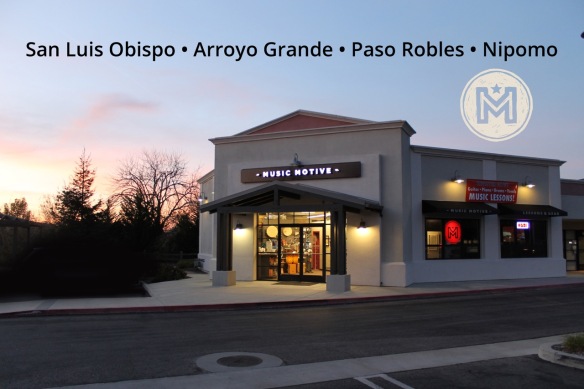 San Luis Obispo: This is the heart of the Music Motive studios, located at 3440 S. Higuera Street #130. Not only are there a multitude of studio rooms for private lessons here, but it’s a store with music accessories too! As if that didn’t make it cool enough already, the showroom there is the placeholder of many Music Motive events, such as the Band Jam, Student Spotlight, and the studio where the Bucket Busters rehearse.

Arroyo Grande: The newest location of the Music Motive studios can be found on 1115 E. Grand Ave (next to Donna’s Interiors). It’s been converted from an old house into a private lesson studio with three studio rooms. The whole place has a really nice feel. It also has a sweet avocado tree in the back yard! What more could you ask for?

Templeton/Paso: This studio is located at 130 Easy Street #5. This studio has a huge main room, big enough that you could do cartwheels all over the place (I won’t judge). There are also two studio rooms for private lessons; I particularly like the sound of the drum kits at this studio.

Nipomo: The quaint Nipomo studio is at 338A W. Tefft Street. This is the smallest of the four studios and has nice vibes. It has two studio rooms for private lessons. I’ve also recently heard from our director Steve Hilstein that Nipomo has the most consistent weather in the United States. Go Nipomo!

So there you have it, all of the key information needed to know which studio caters to your specific where-a-bouts. Feel free to sign up for lessons at any location on our website, call us at 805-543-0377, or drop by our San Luis Obispo studio to register, pick up a set of strings, or play with our puppy!

After writing for Music Motive for over a year, it was about time that I interviewed the man behind it all: Steve Hilstein. I have learned so much from him, not only about the importance of music education, but also about serving a community. Through knowing Steve, I have seen the kind of passion that drives a vision, but I have also seen a genuine, patient, and fun-loving guy. I am constantly inspired by his service and dedication to music education all over the county, and I think you will be too!

Did you decide to teach music?

I started playing drums when I was ten years old, taking lessons, but it wasn’t until I was in my mid-twenties, when a friend suggested that I try teaching. I didn’t really know what I was doing, but I  got my first drum student, and realized how much I enjoyed it. That seems like it was a long time ago. Ha!

What made you want to go into business?

After a few years of teaching and educating myself even further, I began building my drum teaching business. I had quite a few students and I wanted to start carrying drum books to make it convenient for them, so I got my resell license and started supplying things like sticks and drum heads. Before I knew it I was ordering drum sets for them, and I thought maybe it was time to open a drum shop. So, I did and called it “The Drum Circuit”. I had that business for twenty years, but I realized that the retail part of it didn’t allow me the time to fulfill my passion for music education. So, I kept the drum school, but I sold the retail part of it, and branched out to teach other instruments such as guitar, piano, violin, and other instruments. That’s when we eventually transitioned what is now Music Motive! 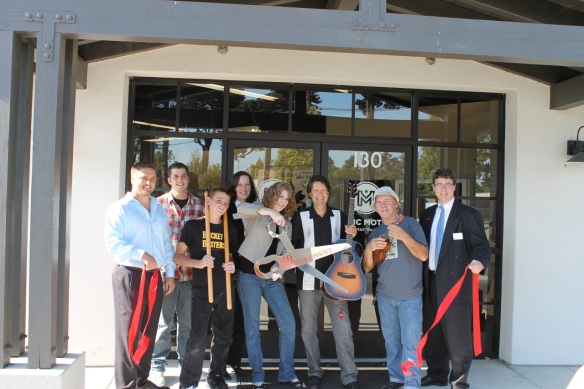 Why do you believe that music education is so important?

I believe that music education is vitally important. I believe it’s the fabric of our lives. Music is all around us and touches us at a very deep level. It’s been my passion, not only to perform, but also to empower other musicians to teach and pass that on.

How did you come to start the Music Enrichment classes in SLO County elementary schools?

It all really started with the Bucket Busters – people would come out to watch us perform and they would ask how their kids could get involved, without realizing that the kids in Bucket Busters are accomplished drummers. So I thought, why not start a drumming class and do it on buckets? We came up with the name Bucketeers, and we were soon invited to teach at schools. We started a program that is capable of bringing about 90 – 8 week classes a year to about 30 elementary schools in San Luis Obispo County. After we initiated the Bucketeers program, we also added Guitar, Sing, Piano, and new this year, Drama/Musical Theater classes as after school programs.

How did the scholarship program begin?

Many years ago a young man came in with his mom to ask how much music lessons were, and I could tell by the look on their faces that they couldn’t afford it. And it broke my heart and I just thought, I want to do something so that every kid who wants to study music, in private lessons, or in the classes in schools, has opportunity. We started comping kids some of the lessons, then we began a scholarship program, which people would fund. Then, the Bucket Busters came along, and all the money that is donated to the Bucket Busters at our performances and through the sell of their CD, “Trash Talk”, goes into the scholarship program. 100% of these donations go toward private lessons for kids, as well as the music enrichment classes in elementary schools. That is huge to me, because now we have money for anyone who qualifies, any family that can’t afford lessons for their child. We can make that happen.

How has your vision of Music Motive changed since you first opened?

I believe we’re on track. We’ve tried some things that didn’t work and others that surpassed my expectations, but there’s still a lot to do and it will always be a work in progress. We’re currently developing a recording program, and a ‘band workshop’ to bring our younger students together to form bands. I would like to have more classes and workshops, and mini-concerts. The ideas just keep on coming, which is really my job – program development and promotion, amongst other things.

What is special about the new Arroyo Grande studio?

We’re really excited about it! It’s a great location, right on Grand Ave. (1115 East Grand) between Elm and Halcyon. When I first walked in the building, which is an old house converted to offices, I could just see that it was meant to be for us. It’s got plenty of parking, large rooms that have been made into 3 studios, a waiting area, an office, and room to grow. We’ve been wanting to be in Arroyo Grande for a long time, now we’re finally there and really excited about it.

Are you still playing music yourself? 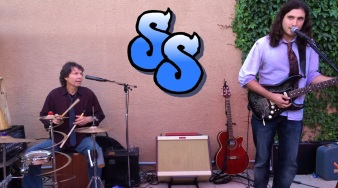 Yeah, I still play – I still do two or three gigs a week with about five different bands: the Oasis Band from SLO, a duo called Stereo Steve, with Steve Ambarian, who is a guitar teacher here at Music Motive, and a group from Southern California called The Scarlet Furies, and recently, I’ve been playing with Monie Mills and the Lucky Horseshoe Band. I’ve also been playing quite a bit in the last couple of years, with the Nataly Lola Band, Randy Rigby, and I host the drums about once a month for the Blues Masters Jam at Shell Cafe in Pismo Beach. I also do some freelancing with people who need a drummer, whoever will have me! One of the things that I really enjoy doing is playing music I don’t know, with people I just met, in a place I’ve never been before. I find that to be a challenge, and really enjoy it – and I seem to be able to pull it off most of the time!

To find out about music lessons, enrichment classes, and the new Arroyo Grande location, check out our website! 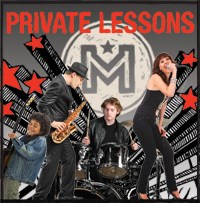